'A little bit of childhood to hang onto forever' - The World of Pooh, Revisited

'A little bit of childhood to hang onto forever'

The World of Pooh, Revisited 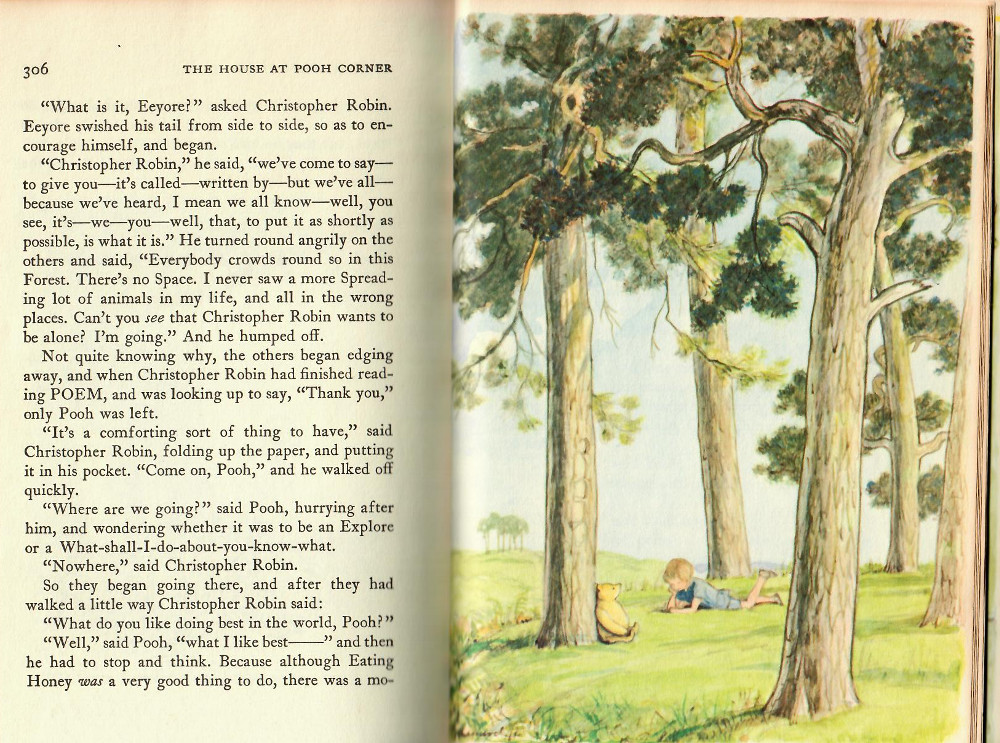 The penultimate pages of The House at Pooh Corner. I'll not spoil the final lines for you, on the off-chance that you haven't read them before.

May 30, 2020 — The best art looks upon the face of change without blinking; the best art acknowledges death.

That's why A.A. Milne's seemingly simple and superficial children's story's, commonly known as Winnie-the-Pooh, brought me to tears when I was very young and why it still does now that I am but one year away from being (forty) six.

That's right, reader, Winnie-the-Pooh makes me cry and I don't care who knows it. Further, it is heartbreaking because it is indeed, about the little deaths each of us face, over and over again, as we grow up. For, like snakes sloughing off a season's skin, to gain a new place in the race of our lives, is to leave the old one behind.

Children's stories or no, A.A. Milne's gentle, loving stories about a small boy and his menagerie of stuffed toys does not shy away from the hard truths of life.

The inscription (at right) is as simple as it is sentimental — and yet as profound as it is cognizant of the unusual boy that was my parents' first child, then making the transition from 12 to 13 years old.

I was a kid who read The Globe and Mail with breakfast and romped with Batman when I came home from school; I was as interested in politics as I was fanatical about the fate of the Montréal Canadiens; a kid whose long-term ambitions were torn between wanting to go into cosmology in one way or another, or into politics with an eye towards becoming Canada's first socialist Prime Minister.

I still built sand-castles in the summer, yet thrilled to CBC Radio's international affairs program, Sunday Morning, "a week in the life of the world." I was growing up, I knew it, but I happily embraced those parts of me that were still childish.

The World of (very young) Geoffrey

We were far from rich when I was growing up and going out to a restaurant was a rare treat (even taking home Chinese or a pizza was an uncommon occurrence). But they usually managed it on our birthdays.

My 13th was no exception.

If memory serves, both my mother and my father were present despite the fact they had separated a few years before. We ate at an Italian restaurant, one with linen table-clothes and waiters wearing ties — a fancy place indeed to a 13 year-old Sudbury boy.

I enjoyed a plate of veal parmigiana, with spaghetti and meat-sauce on the side and, no doubt, a chocolate milk-shake.

I don't remember the conversation that went 'round the table, but I do remember when the presents came out after dinner.

And the present I remember unwrapping, unlikely as it may sound, was the very volume whose illustrations accompany this piece.

The book was (and still is) a hard-cover omnibus edition of stories I had loved since before I could remember, stories my mother had read to me and my brother over many nights, again and again. In my mind both books were Winnie-the-Pooh, but by law they were Winnie-the-Pooh (1926) and The House at Pooh Corner (1928).

It was in fact a very good edition. The book today, though yellowed 'round the edges and missing its dust-jacket, is in excellent condition and shows every sign of being around at least another 32 years and probably thrice that without difficulty.

I opened it up and read the inscription with gratitude and pleasure. I was turning 13 and I knew very well that my childhood was slipping away from me. Having a small piece to hold on to forever seemed like a very fine thing to me.

And indeed, over the subsequent years, I read and re-read the book many times, probably once every two or three years, usually on one of those melancholy Sunday afternoons when it's raining non-stop, or feels like it anyway. One of those days one wants to revisit a comfortable place.

Mind you, even those of us who struggle to hold on to our personal chain of being — to feel the link from then to now — inevitably find that links once thought secure rust and break away.

The superhero comic books I once loved just about unreadable to me today1.; Frances Hodgson Burnet's The Secret Garden is smug and really boring and even Kenneth Graham's The Wind in the Willows had lost much of its charm the last time I revisited it, probably nearly a decade ago.

I think it was that latter disappointment that stopped me from opening Pooh again for many years, perhaps because my edition was also illustrated by Sheppard. At any even, I decided that I didn't want to risk learning that the world of Pooh was another world lost to me for good.

Now, it occurs to me that many of you who know the "bear of very little brain" strictly through the execrable bowdlerizations courtesy of Walt Disney Inc. might be wondering just what in the world it is I am going on about. Certainly, it was that belief on my part, and that reality on the part of a friend (the lovely and intelligent woman I am allowed to refer to only as Raven), who indeed knew Pooh only as a Disney image, just one more corporate symbol polluting the childhoods of people the world over.

All right, "polluting" is my word, not hers.

"He's cute!" she said a few weeks back. I grumbled and shoved back my chair, then stalked into my office, shortly thereafter returning with my prized (if long unopened) possession.

"It's a damned sight better than 'cute'!" I thrust the volume at her and, with understandable trepidation, she began to leaf through it.

I had no intention of re-reading the entire book. But once I'd read a couple of chapters and found myself laughing out loud at Rabbit's officious pomposity, at Eeyore's morosely self-pitying sarcasm I found myself compelled to return to the begining.

But I think it was this exchange that made the decision final.

Whether he would have thought of anything before he had finished the last sandwich, I don't know, but he had just got to the last but one when there was a crackling in the bracken, and Christopher Robin and Eeyore came strolling along together.

"I shouldn't be surprised if it hailed a good deal tomorrow," Eeyore was saying. "Blizzards and whatnot. Being fine today doesn't Mean Anything. It has no sig — what's that word? Well, it has none of that. It's just a small piece of weather."

"There's Pooh!" said Christopher Robin, who didn't mind much what it did tomorrow, as long as he was out in it. "Hallo, Pooh!"

"It's Christopher Robin!" said Piglet. "He'll know what to do."

They hurried up to him.

"Tigger and Roo are right up the Six Pine Trees, and they can't get down, and —"

"And I was just saying," put in Piglet, "That if only Christopher Robin —"

"If only you were here, then we could think of something to do."

Christopher Robin looked up at Tigger and Roo, and tried to think of something.

"I though," said Piglet earnestly, "that if Eeyore stood at the bottom of the tree, and if Pooh stood on Eeyore's back, and if I stood on Pooh's shoulders —"

"And if Eeyore's back snapped suddenly, then we could all laugh. Ha ha! Amusing in a quiet way," said Eeyore, "but not really helpful."

"Would it break your back, Eeyore?" asked Pooh, very much surprised.

"That's what would be so interesting, Pooh. Not being quite sure till afterwards."

Over a few days, a chapter or two at a time, I read the book(s) from start to finish, wondering whether Milne's eucatastrophe still held any power over my imagination.

About midway through the second book, I began to feel more confident. Milne hints at the small tragedy to come and I found my eyes watering appropriately.

And yes, when the final revelation comes, when we learn what Christopher Robin does in the mornings and prepare to Say Goodbye, I wept nearly as freely as I had as a child.

The world of Pooh is a small world, but a true one; a child's world, but not a childish one. Death is disguised as change, but it is present — as it should be. And Milne's courage, or good sense (or maybe just good luck) means that his creation will outlast any number of saccharine Disney adaptations. Winnie-the-Pooh will stand the test of time.

So, thank you, mummy and daddy. Thank you for that utterly appropriate gift as I was coming of age. And many happy returns of the day, to me and to all of us still linked to the children we once were. 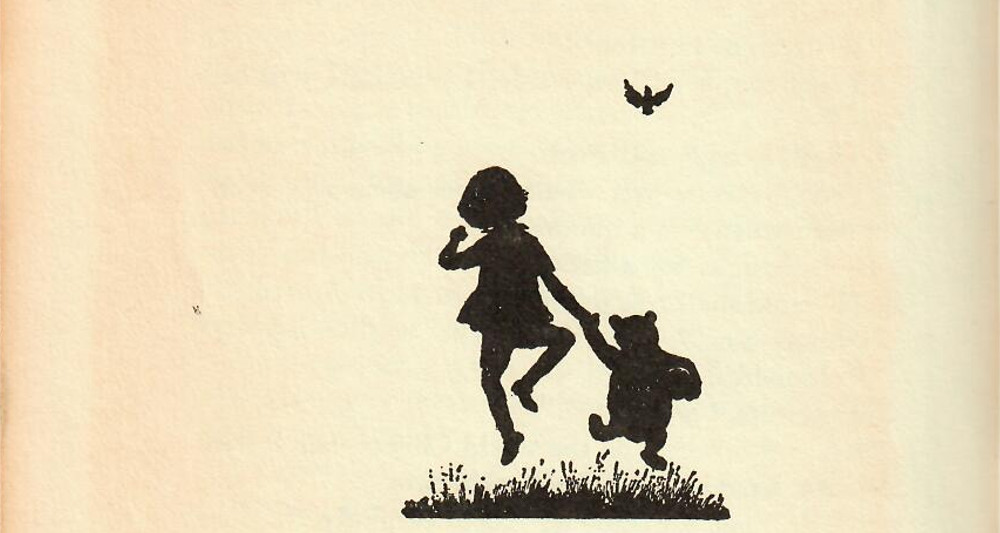 Unless otherwise noted, all content is copyright © 2020 by Geoffrey Dow and The BumblePuppy Press